The Federal Reserve is grappling with elevated inflation by taking a hawkish stance and raising interest rates. The threat of a recession is real, and many consider it is inevitable. This is the bad news. The good news is that some stocks perform well no matter what, others perform better historically during economic difficulty, and others go on sale.

You may be wondering, why invest at all during a downturn? Studies show that staying invested produces much greater returns than trying to time the market. It turns out that missing just a few of the largest “up” days crushes long-term profits. And those rallies often come when we least expect them. The best move for long-term investors is to have a disciplined strategy and stay the course.

Recessions come about for various reasons, and each has unique aspects — including today’s economic slowdown. But no matter the cause, they generally result in stocks falling in price. Yes, it’s nearly impossible to predict an exact market bottom, but a dollar-cost averaging strategy can reduce risk. There are several tried-and-true methods to take advantage of this market drop:

Let’s find out a bit more about these five stocks that can outperform in a recession.

Sleep well at night with dividends

The prescription drug market is highly recession-proof. These products are primarily necessities, not luxuries. AbbVie is a leading developer, manufacturer, and marketer of pharmaceuticals that is best known for its Humira franchise.

Humira will soon face competition from biosimilars — biologic products approved because they’re highly similar to existing medicines (but not generic forms of the existing med) — but AbbVie has developed a tremendous portfolio. It produced over $56 billion in 2021 revenue with $35.5 billion in non-Humira sales.

The loss of some Humira revenue will be challenging, but the company has guided for over $15 billion in annual sales from its new drugs Rinvoq and Skyrizi by 2025, which should help fill the gap. The stock yields around 3.5% and has outperformed the S&P 500 this year by more than 30%, as shown below.

American Tower is one of the world’s largest real estate investment trusts (REITs) with 221,000 communication sites globally. A REIT enjoys certain tax advantages provided it returns 90% of its taxable income to shareholders as dividends.

Like AbbVie, American Tower provides a product critical to daily life — in this case, communications towers leased out to various radio and cellular services. Global data usage will likely continue climbing for a long time.

American Tower grew adjusted funds from operations (AFFO) per share at a compound annual growth rate (CAGR) of 13.8% over the past decade while its dividend rose at an even higher 21.5% CAGR during that time. 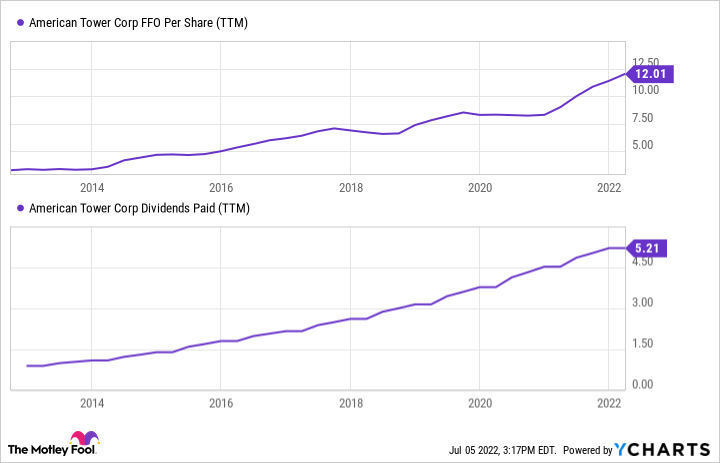 The dividend currently yields around 2%. This is a terrific stock to buy and tuck away.

The prices of used and new vehicles have skyrocketed, and a detailed look at the reasons partially explains why. The bottom line is that supply-and-demand forces conspired to push prices out of the reach of many Americans. These folks need their current vehicles to last longer, and AutoZone’s parts for DIYers and professionals are in demand.

Same-store sales increased 2.6% year over year last quarter, on top of a 28.9% increase the year before. Management needs to manage rising costs but is confident the company will outperform in an economic downturn, as it has historically. 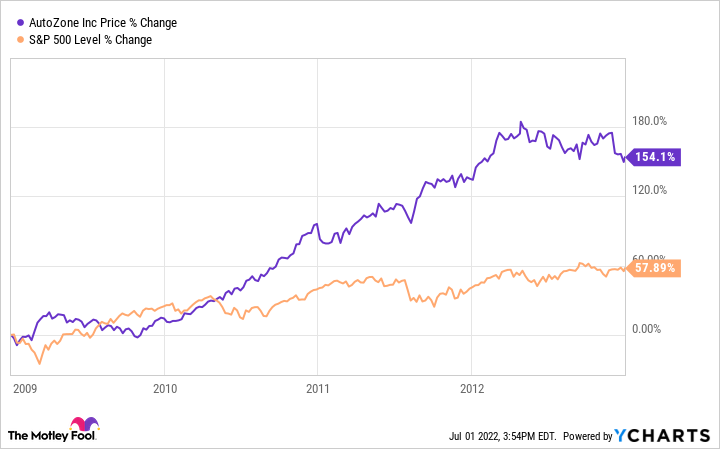 As shown above, the company massively outperformed the market during the Great Recession and is gearing up for a repeat performance.

Sprinkle in some beaten-down growth stocks

Growth stocks have taken an absolute beating in 2022. Many posted terrific results and have favorable secular prospects. Nibbling at these now could be a smart move for long-term investors.

Robot-assisted surgery is gaining widespread adoption from reputable practitioners, including the Mayo Clinic. Surgical systems enable doctors to perform procedures using minimally invasive techniques. This reduces complications and recovery times, among other benefits. Intuitive Surgical is the dominant industry leader, with over 6,900 of its da Vinci surgical systems installed.

Intuitive is not the average growth stock. Let’s count the ways:

Intuitive is trading at its lowest price-to-earnings ratio since the pandemic, possibly making this a terrific time for long-term investors to get greedy.

Cybersecurity is important to many CEOs. Cyberthreats and security needs are flourishing, and so is Palo Alto Networks. This network, cloud, and endpoint security company posted $1.4 billion in sales last quarter with a $6.9 billion backlog, an increase of 29% and 40% year over year, respectively.

Continuing to invest in the face of market turmoil is tough, but the numbers don’t lie. Investing for the long haul in solid companies is the way to go.