The Snapdragon 8 Gen 2 will potentially see a Q4, 2022 announcement if Qualcomm’s launch history is anything to go by. Now, if you are wondering when exactly will the official unveiling happen, the chip maker may have left a massive clue.

The Snapdragon Summit is an annual conference where Qualcomm showcases the latest technologies that it has been working on, including one chipset that will fuel future Android flagships. On this occasion, the Snapdragon 8 Gen 2 is expected to be found in premium handsets of 2023, and according to the San Diego chip maker’s events page, the Snapdragon Summit will be held between November 14-17.

Snapdragon 8 Plus Gen 1 Gets Praise for Its Energy Efficiency, Tipster Claims That Customers Can Purchase Android Flagships Without Worry

Looking at Qualcomm’s history, the flagship mobile SoC is typically announced on the first day of the Snapdragon Summit, meaning that the Snapdragon 8 Gen 2 could see an unveiling on November 14. Qualcomm’s phone partners like Xiaomi are also expected to attend the conference, where it may provide a preview of its flagship series shipping with the Snapdragon 8 Gen 2. In this case, those premium smartphones will likely be called the Xiaomi 13 and 13 Pro. 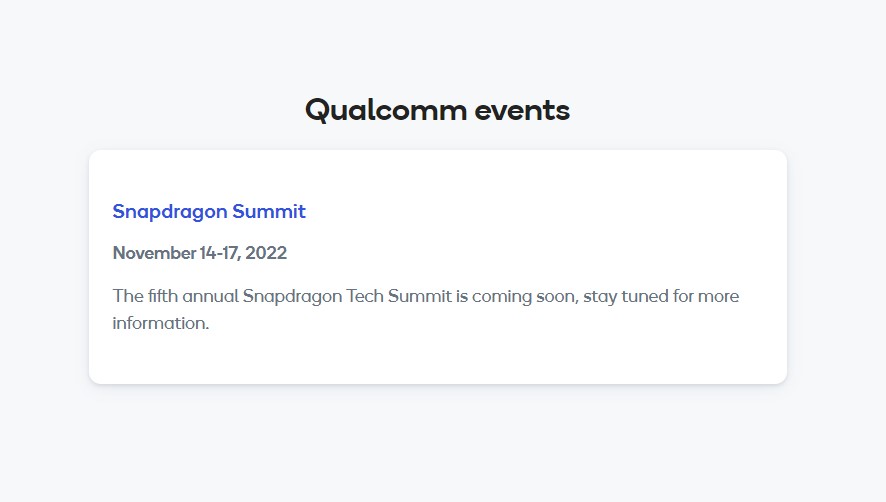 We may also get a preview of the Snapdragon 8cx 3 successor, which is unnamed for now, but earlier reports placed this SoC as a competitor to the M1. Qualcomm stated earlier that it would take advantage of the Nuvia acquisition to bolster its future chipset’s performance in a bid to take on Apple’s M-series. As for what we know about the Snapdragon 8 Gen 2, Qualcomm will likely stick with TSMC’s 4nm architecture to mass produce its next-generation silicon.

TSMC is said to start mass production of Apple’s M2 Pro and M2 Max later this year using its cutting-edge 3nm technology, but it is doubtful that Qualcomm will take advantage of this node at least until next year. Thankfully, with what we have seen with the Snapdragon 8 Plus Gen 1, the Snapdragon 8 Gen 2 will boast improved power efficiency and increased performance.

It may also be the first SoC from Qualcomm to sport a completely new CPU cluster in years, foregoing the ‘1 + 3 + 4’ core configuration and switching to a ‘1 + 2 + 2 + 3’ configuration instead. Whether or not this change will deliver substantial improvements is anyone’s guess, so as always, we will wait for actual results to come through.

More information about this chipset will likely be available in the coming weeks.