Chiphell member Misaka_9993 purchased an Intel DG1 discrete GPU and decided to give it a try on an AMD motherboard. Initially the user wanted to try DG2 (Arc Alchemist) graphics, however the pricing and ability of these GPUs are still a problem, even in China.

So instead of waiting for DG2, Misaka bought GUNNIR DG1 graphics card with 80 Execution Units. This is the first custom Intel GPU featuring Xe architecture that launched last year. The card uses a cut-down version of the DG1 GPU based on Xe-LP architecture. Although not mentioned, this should be either Iris Xe or Iris Xe Index V2.

The only problem with DG1 series is that they do not work with AMD motherboards, at least not officially. Misaka used AMD Ryzen 7 5700G integrated Vega 8 GPU to boot up a system on ASUS ROG STRIX X570-I motherboard though UEFI and with CSM (Compatibility Support Module) disabled. This means that the system boots from the integrated GPU, but can still output the signal through DG1’s HDMI port.

Undoubtedly, this is not a perfect configuration, but this way DG2 GPU works and Misaka can show two GPU-Z windows running alongside each other. Each window show a different GPU: AMD Cezanne’s Vega on the left and Intel’s DG1 (Iris Xe) on the right side. That’s definitely not a very common sight, at least not with AMD serving as a platform.

Despite its limited gaming performance, DG1 has capable media decoding performance, which is the main reason why anyone should even consider this GPU. In terms of raw compute performance though, it is much slower than AMD Vega, as demonstrated by AIDA64 benchmark. One should note, that DG1 is a PCIe Gen4 x8 graphics card, while Ryzen 7 5700G only supports PCIe Gen3 x16. Therefore, Gen3 will limit the maximum bandwidth for 8 lanes. 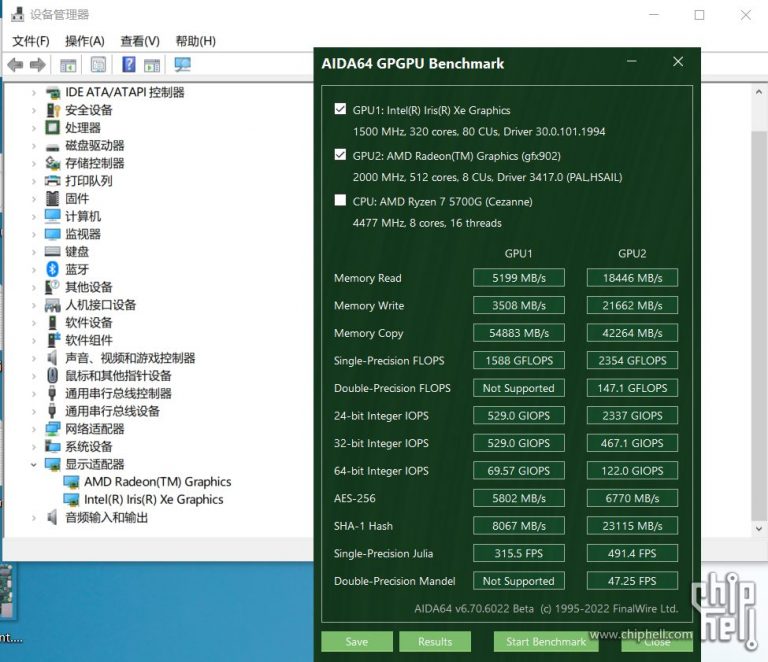 Intel DG1 was the company’s test drive in releasing the first modern discrete GPU. It is not a very popular card, yet much more likely to be found in store than its successor: the Alchemist DG2-128 (ACM-G11) based Arc A380 desktop GPU.