Preseason schedule yesterday, regular-season schedule today! The 2022-23 schedule is here in all of its glory. From the home opener against Vegas for the second season running, to the playoff rematch against Edmonton, to a pair of six-game roadtrips and the Freeway Faceoff to end the regular season, an action-packed slate of 82 games awaits us come October.

With that in mind, and a detailed breakdown to follow below, here’s the first look at the 2022-23 LA Kings regular-season schedule – 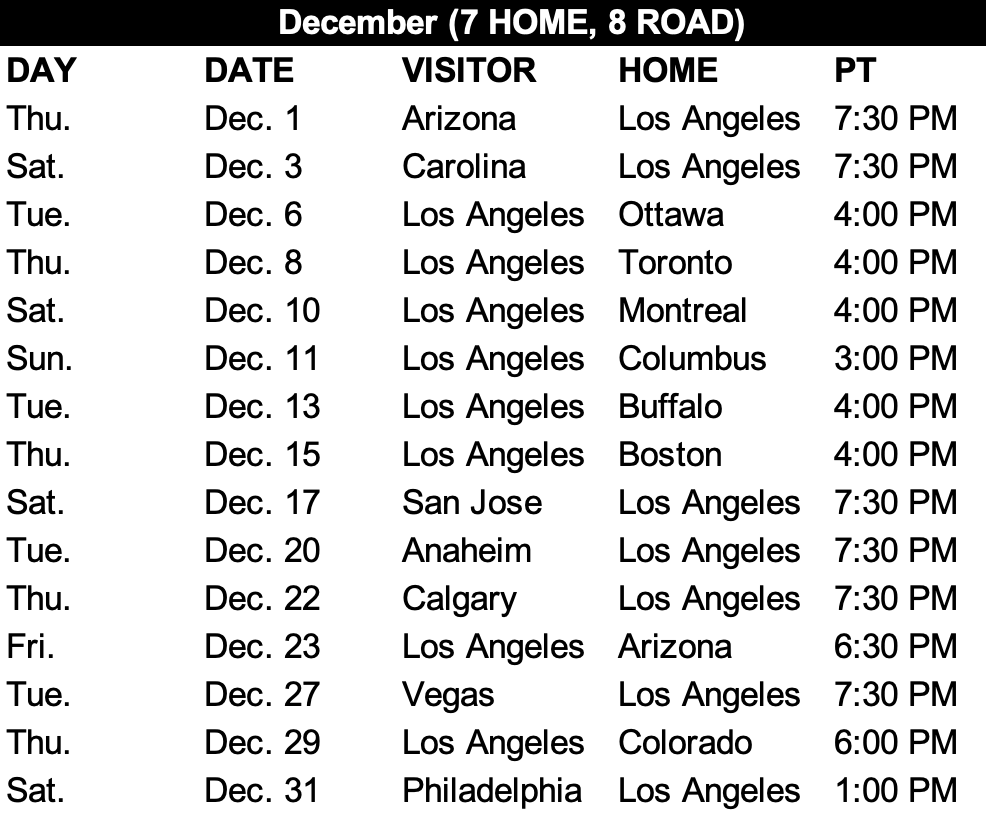 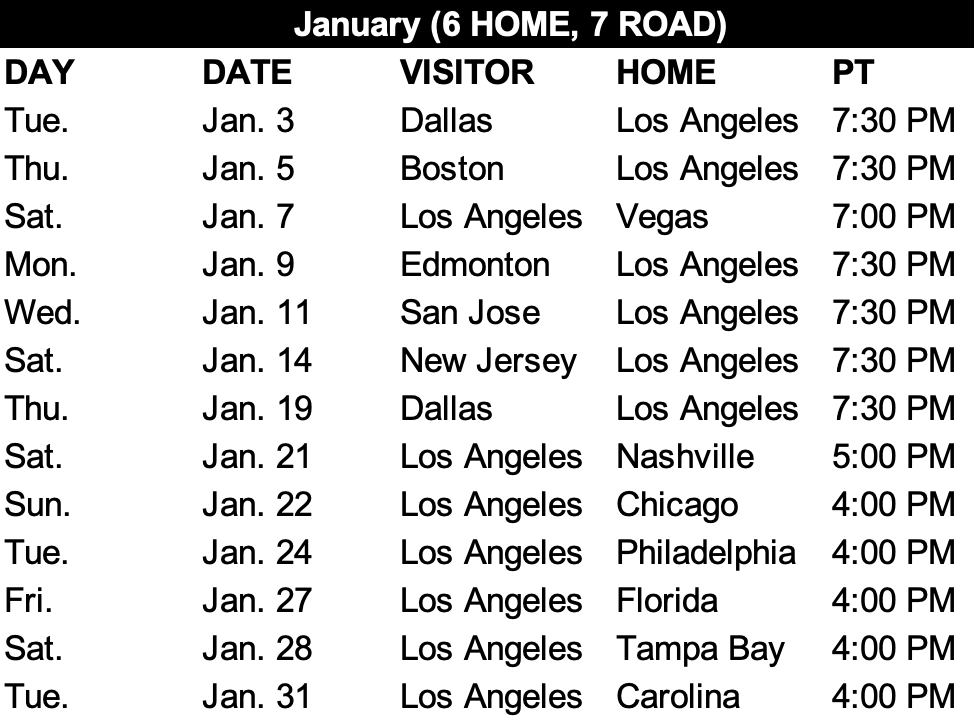 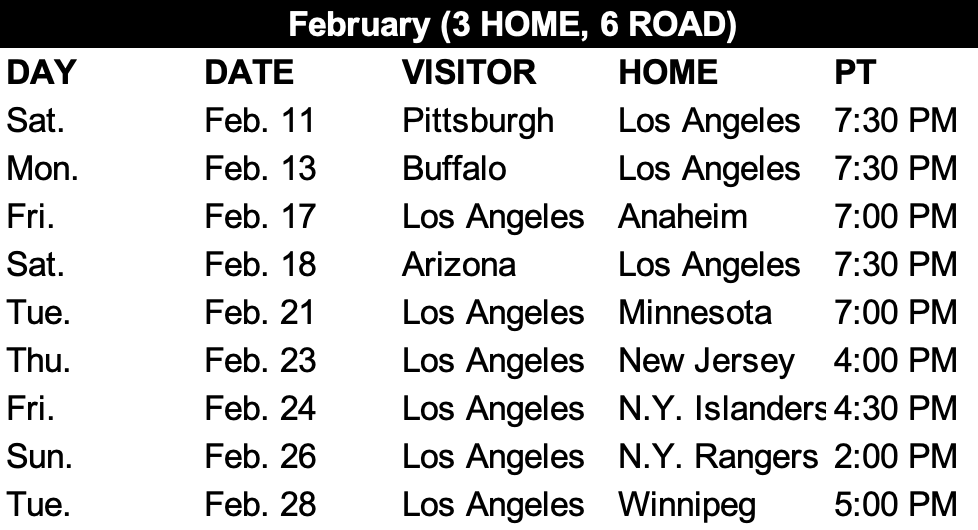 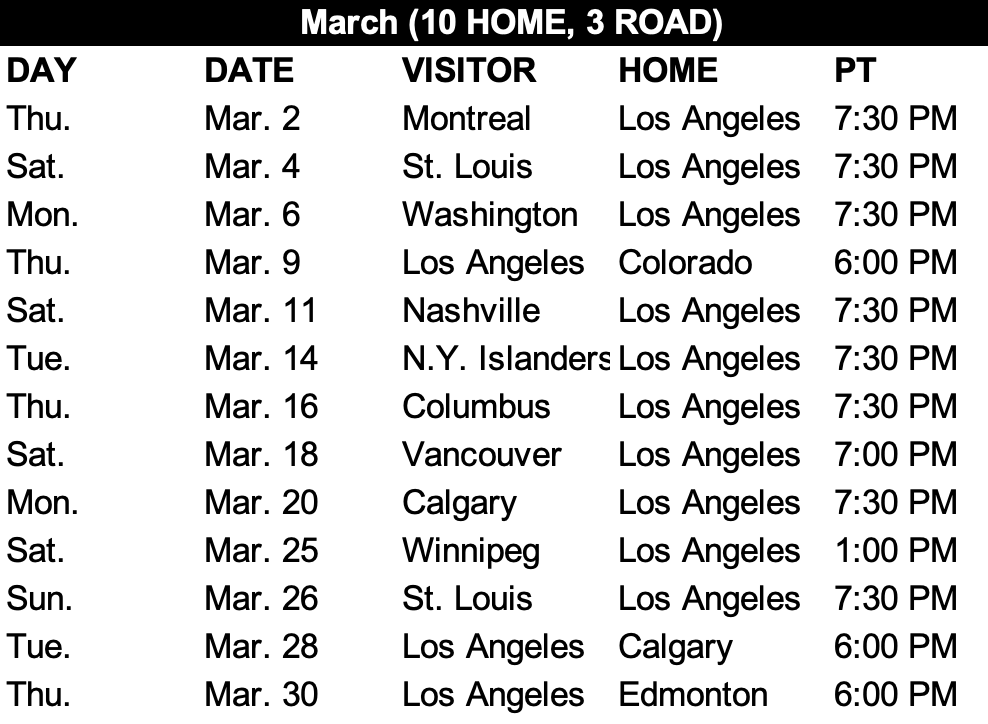 The breakdown of this season’s schedule mirrors last season in terms of format. The Kings will play five Pacific Division opponents four times, twice home and twice away, and two opponents three times. The outliers this season are the two California teams, with the Kings hosting Anaheim just once (December 20) and visiting San Jose just once (November 25). This will be just the second time in franchise history that the Kings will only face either Anaheim or San Jose three or fewer times in a season. The only time previously was the 2019-20 campaign, when two Kings/Ducks matchups were cancelled, in addition to one Kings/Sharks matchup.

The Kings will face Calgary, Edmonton, Seattle Vancouver and Vegas twice at home and twice on the road.

In the Central Division, the Kings will host Arizona, Dallas, St. Louis and Winnipeg twice and visit each team once. The Kings will host Chicago, Colorado, Minnesota and Nashville once, visiting each city twice. Highlighting the Central Division slate is a late-season showdown with the defending Stanley Cup champion Colorado Avalanche, who visit Los Angeles for the only time this season on April 8, the second-to-last home game of the season.

The Kings will face all 16 Eastern Conference opponents once at home and once on the road. The defending Eastern Conference Champions, the Tampa Bay Lightning, visit Crypto.com Arena on October 25, the third home game of the 2022-23 season. Other highlights include a pre-Thanksgiving showdown against the New York Rangers on November 22, a New Year’s Eve tilt against Philadelphia on December 31 and the first game back from All-Star Break versus Pittsburgh on February 11. 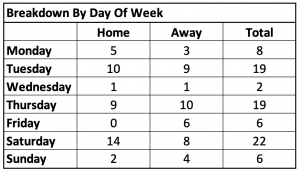 – Similar to last season, Friday evenings will not be on ice in Los Angeles. The Kings won’t play a single home game on a Friday this season, with just six total Friday games, all on the road. Wednesday will be the quietest day of the week overall for the Kings, with a total of just two games on that date, one home and one away.
– The most frequent day of the week on the schedule, both in terms of home games and total games, is Saturday. The Kings will play 14 home games on Saturdays at Crypto.com Arena and 22 Saturday games in total. The Kings will play 10 road games on a Thursday, leading the way for the weekday calendar. Behind the 22 games on Saturday, the Kings will total 19 games apiece on Tuesdays and Thursdays.
– The distribution of this season’s schedule, overall, is much less balanced across the board. Last season, the Kings played nine or more games on six of seven days of the week, down to just three days this season. Much of the imbalance stems from road dates, moving from six of seven days with at least five road tilts, to just three in 2022-23. The home schedule is similar to last season, driven by Thursdays and Saturdays, with a rise in Tuesday home dates as well. 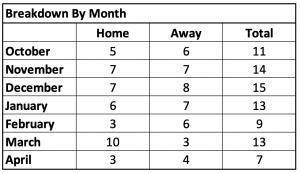 – The first half of the Kings schedule is extremely balanced in terms of distribution. The Kings play between five and seven home games from October through January and between six and eight road games in that span, with between 11 and 15 games in total in each month, October to January.
– Starting with February, the schedule balance changes, with February slanted towards away games (6 of 9 on the road) and March slanted towards home games (10 of 13 in Los Angeles). The team’s 10 home games in March are the most in one month this season and the most in one month of a full, 82-game schedule since January 2011. The Kings played 11 home games in April of the 2020-21 season, which was compacted due to the condensed, 56-game schedule.
– Like last season, February is a unique month. Last season saw a three-week break inserted for participation in the Winter Olympics, though NHL players ultimately did not attend. This season, the Kings have a ten-day break around the 2023 NHL All-Star Weekend in Florida. Unlike last season, April is back to its shortened nature, with the Kings playing just seven regular-season games, ending on 4/13. With that in mind, the league will return to more normal calendar with the first round of the postseason coming in April as opposed to May. 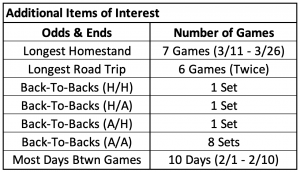 – The Kings have a pair of six-game road trips this season, with one running from December 6 through December 15 and the second running from January 21 through January 31. Last season, the Kings had one, six-game roadtrip and posted a 4-0-2 record, the second-best mark on a six-game trip in franchise history.
– As a part of the month of March, noted above with 10 total home games, the Kings will have a season-long, seven-game homestand that spans from March 11 to March 26. The seven-game homestand is tied for the seventh longest in franchise history. The Kings had two, seven-game homestands during the 2021-22 season and posted records of 1-3-3 and 5-1-1, with the latter tying a franchise best mark. The organization last had a homestand longer than seven games during the 2010-11 season (eight games).
– The Kings have 11 back-to-back sets this season, a substantial reduction from the 15 they had during the 2021-22 season. 10 of the 11 consist of games in different cities, with eight of the 11 consisting of consecutive road games. The Kings also have one set of consecutive home games, one home game followed by a road game and one road game followed by a home game. The 11 total b2b’s are, by my count, the fewest since the 2014-15 season.
– The schedule appears to have a surprisingly small number of matinees. The Kings, at this time, only have two true matinee starts – 12/31 vs. Philadelphia and 3/25 vs. Winnipeg, both slated to begin at 1 PM. The Kings also host Toronto for a 4:00 PM game in late-October and have a pair of 5 PM local starts on the road against New York and Vancouver, with the former a 2 PM puck drop in Pacific time. Perhaps some times could shift as television schedules become clearer, with that information coming later this summer.
– The Kings will be in St. Lous, the Halloween capital of the Midwest I’m told, on October 31. The Kings will be in Seattle on April Fools Day, unless that’s just an early joke. The Kings play at home heading into Thanksgiving, on November 22, and heading out of Christmas, on December 27.
– NHL All-Star Weekend will be hosted by the Florida Panthers this season, taking place on February 3-4 in Sunrise, FL. The Kings finish their pre-break schedule three days prior in Carolina, making for easy travel for whoever is selected to participate. The 2023 Honda NHL All-Star Weekend will include the Honda NHL All-Star Game on Saturday, Feb. 4 and NHL All-Star Skills on Friday, Feb. 3.

And that, Insiders, is your yearly over-breakdown of the schedule. From here we’ll be shifting focus to the draft. What does a writer di on Day 1 of the NHL Draft, when his or her team does not pick in the first round? We’ll all find out together tomorrow!